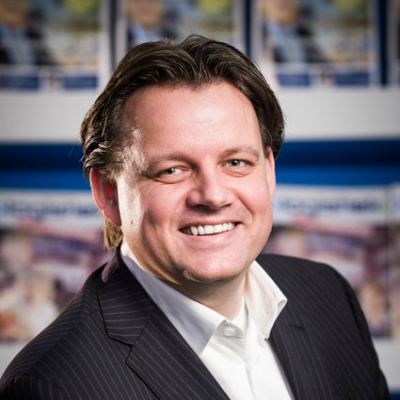 More and more businesses are joining the NewWays community, which matches shippers from Southern Holland up with each other to create combined shipment journeys on European railways. This is a market-driven initiative where various shippers are pooling their cargo to transport it efficiently, and at lower rates, by rail. Robert van der Waal, Director of Logistics Operations for Samsung, is one of the people who initiated this community which aims to make rail transport more profitable. On June 23, he will be giving a presentation on this during the Global Rail Freight Conference in Rotterdam. Read more about his perspective on the NewWays community and transport by rail.

The first steps towards the NewWays initiative emerged during a workshop of the Multimodal Smart Match project (NewWays’ forerunner) in 2013, when van der Waal came into contact with chemicals company SABIC. During these discussions it emerged that both companies used the same routes, by truck, to Eastern Europe, and they had the idea of combining transport via rail.

According to van der Waal: “SABIC has a factory in Bergen op Zoom, and supplies its products to Eastern Europe. We have factories in Slovakia, Hungary and Poland which stock our European distribution center in Brabant. Hence we had the idea to combine these trips.” At that time, containers were transported by road for both companies. Nowadays the containers come from Eastern Europe to the rail terminal in Tilburg.

He goes on to add that: “Each year we see an ever-increasing swing between scarcity and abundance, making it difficult to handle transport volumes well. If there is excess, road traffic options close. Rail transport is a good and sustainable alternative, but is relatively expensive for Samsung because we do not always have sufficient volume. Therefore we are exploring the possibilities of combining loads with other shippers.”

“There are companies that organize combined rail transport. But, as opposed to working with NewWays, you end up giving the difference you have saved to a middle man. By removing the middle man, we were able to come up with a solid business case.”, said van der Waal. NewWays was set up by, and for, shippers.

“In addition to lower transport costs, transportation by rail also has the advantage that containers can stay at the terminal in Tilburg for a week or two. We can therefore adapt our ‘’warehouse process’’ to the needs of our customers. It’s difficult to say to a truck driver that he ‘’should just find a hotel'”, considers van der Waal. Another advantage is that payloads have gone up thus more pallets can be transported via rail.

Samsung’s director of Logistics Operations went on to add that: “About 250 people work in our warehouse in Tilburg. This shift from a push to a pull system also means I can deploy workers differently. During peaks in demand, it can be that our employees have to work night shifts. Now that we have more flexibility in the loading process, this occurs less frequently. This method also means an enormous reduction in C02”.

NewWays is currently working to develop more business cases. Samsung is also looking to collaborate with other companies – for example, transporting by rail not only from the factory in Poland but also from China. According to van der Waal: “We are, for example, collaborating with Ricoh and other parties to see if we can set up a rail connection to China. Other clusters of businesses within NewWays are examining the options of rail service to Turkey and Spain.”.

The regional NewWays community now includes thirty shippers, eight to ten of whom are actively engaged in NewWays initiatives. NewWays is being assisted by independent parties such as university NHTV, development company BOM, Midpoint Brabant and REWIN. NHTV is calculating what the advantages of combined rail transport are, based on data supplied by the participating companies – “You see that rail transport needs a push. In sharing successes, others will join up.”